Between the towns of Matalascañas and Mazagón and following the Cuesta Maneli path, is the Asperillo Cliff Natural Monument, a system of fossil dunes that extend along twelve hectares of coastline.

It is considered one of the coastal formations with the most unique geomorphological and ecological characteristics of the Peninsula, since it is a sandy cliff formed by the sedimentation of sands of wind and alluvial origin, organic matter and other materials. The different layers were deposited over time, so that later the forces of the earth raised them more than 100 meters. The oldest materials are estimated to be between fourteen and fifteen thousand years old.

The waves and the wind produce continuous changes in these dunes. From the extensive beach it is possible to notice on its walls the different shades of orange, white, ocher and black that are stratified, causing capricious undulations and geometric shapes interrupted by gullies. The practically null existing vegetation in the profile stands out due to the harsh coastal conditions and the steep slope that they support. In the upper part, settled on the sands, gorse, camarinas, junipers and the repopulated stone pine can be seen. This tree with its roots fixes the sand preventing the advance of the dunes. Endangered species such as the spur-thighed tortoise, the long-snouted viper, the Iberian lynx or the Egyptian mongoose live in these environments. Entering to contemplate the landscape or bathe in one of its beaches are some of the options to enjoy this protected natural area. 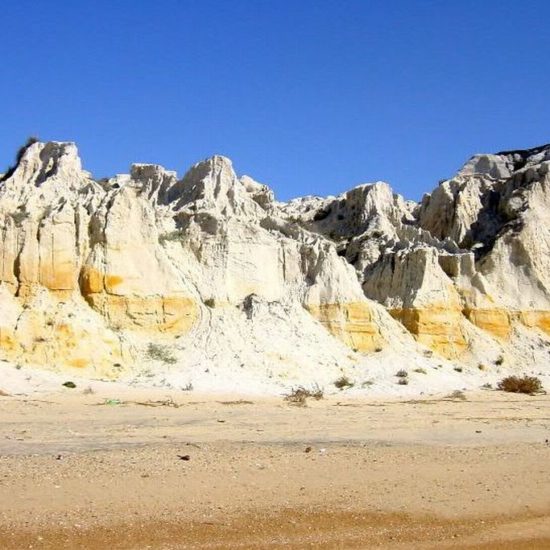