From the mouth of the Guadiana River that of the Guadalquivir River, the Beacon Towers of Huelva, a chain of fortifications located practically on the seashore, was ordered to be built during the reign of King Philip II. Its function was the surveillance and defence of the coastal territory, against the attacks of pirates and corsairs, as well as other European forces that were at war against the Spanish monarchy. The beacon towers located in Doñana are: Torre del Oro and Torre del Asperillo (Natural Park), Torre de la Higuera (between the Natural Park and the National Park), and Torre de La Carbonero, Torre de Zalabar and Torre de San Jacinto (National Park). One of the best-known towers is Torre La Higuera, which has become a sign of the passage of time and a symbol of Matalascañas.

The largest number were built between 1577 and 1630, almost all with a similar form, cylindrical, although none is the same as another. The different historical sources allow us to speak of up to fourteen beacon towers, although few retain their original location, among other factors because the coastline has changed.

It is the worst preserved of these beacon towers. The remains that can be seen today are limited to some remains of walls in which the masonry ashlar can be seen. These remains are only visible at low tide because at high tide they are hidden. In the first half of the 18th century, it was decided that it be demolished for fear that it would tip over and to rebuild it at 50 m. It forms one of the most beautiful places in the Doñana Natural Park, especially as it has the Asperillo cliff in its surroundings.

This beacon tower appears as a landmark on Matalascañas beach, being an indisputable reference for all tourists who visit it. In 1755, due to the effects of the Lisbon earthquake, the tower was overturned, presenting its current state as a consequence. Only the foundations of the tower are preserved and inverted; its strong mortar can be damaged by the waves of the sea or by anthropic aggression.

This is the beacon that has suffered the least variation in its environmental physiognomy, perhaps due to the fact that it remains further away from urban centres. . It has a conical base with plastered masonry rigging. It also has an inner chamber that performs its function as a watchtower and is covered by a hemispherical dome.

It is yet another beacon tower on the coast. The tower, from the sea, offers us an acceptable view of its state of conservation; but seen from the ground, you can see a huge gap that affects a third of its perimeter. The chamber can be seen, with a hemispherical dome. You can even see what remains of the spiral staircase. It is built on the uninhabited Castilla beach and close to the Cadiz coastline.

The tower is located on the contact line between the last cordon of dunes at Malandar Point and the stone pine tree mass. It is far from the coast due to the sandy accumulations in this area. It appears as a frustum of a 15m cone. At the height of the column, it presents two corbels. It is the only one of the towers that has four attics, since it is more common to have only one perpendicular to the access door. This tower is in good condition. Some elements have disappeared, and others are affected by humidity, erosion or parasitic vegetation.

The Police Corps Barracks Created in 1829 under the name of the Royal Coastal and Border Police Corps, by Ferdinand VII, had the function of preventing fraud and smuggling, and were present in maritime provinces, on land borders, and in Madrid. The old barracks present in the National Park are, at least, those of Matalascañas, Zalabar, El Inglesillo, Punta del Malandar and Marismillas, with several existing in the Natural Park, such as Mata del Difunto. The ruins of the former Mata del Difunto police barracks are located northwest of Torre la Higuera, near the edge of the Asperillo cliff. The absence of water was supplied by an underground cistern of a certain size (we estimate it can exceed 20 m3) that is still preserved. It is located exempt from the building and accessible through a parapet. Currently it does not collect water and is dry.

The World War II bunkers on the Huelva coast were ordered to be built by Franco around 1943, in response to the Allied invasion of North Africa in November 1942. Three were built on what is now the Huelva coast. Doñana National Park, to protect the mouth of the Guadalquivir; They are located in what is known as Punta del Malandar.

The interior of the temple is structured on a semi-circular floor plan with a central altar dedicated to Saint Francis of Assisi, and a chapel dedicated to the Virgen del Rocío.

It is the coastal front of the Parque Dunar. The Matalascañas Lighthouse is located there, and it is a privileged place to contemplate beautiful sunsets. This lighthouse can be seen at the western end of Matalascañas beach. It was built in the 1990s, being a benchmark in the Asperillo dune. It belongs to the network of lighthouses, under the jurisdiction of the Huelva Port Authority, formed by the lighthouses of El Rompido, Mazagón and Matalascañas, in addition to the beacon of the Juan Carlos I dam, and without forgetting the Lighthouse of the coastal shelf of Cristin Island.

In both places you can go shopping, enjoy tapas and leisurely stroll with a great atmosphere and bustle of people at night. From these points there is a tourist train that runs through part of the town and that allows us to take a tour of its streets and get to know Matalascañas. 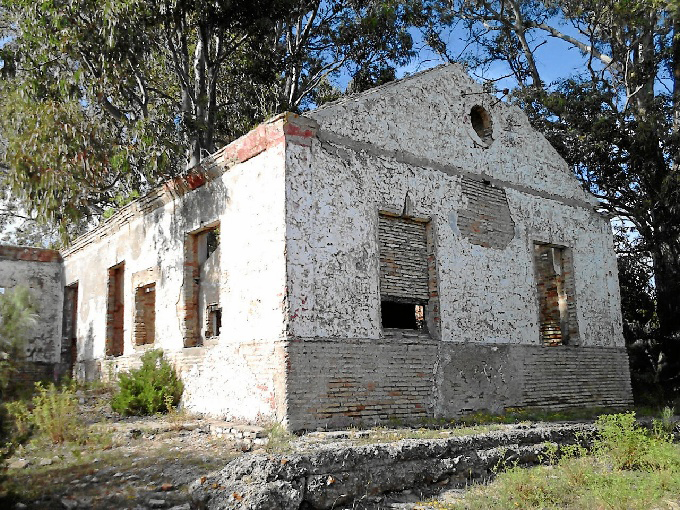 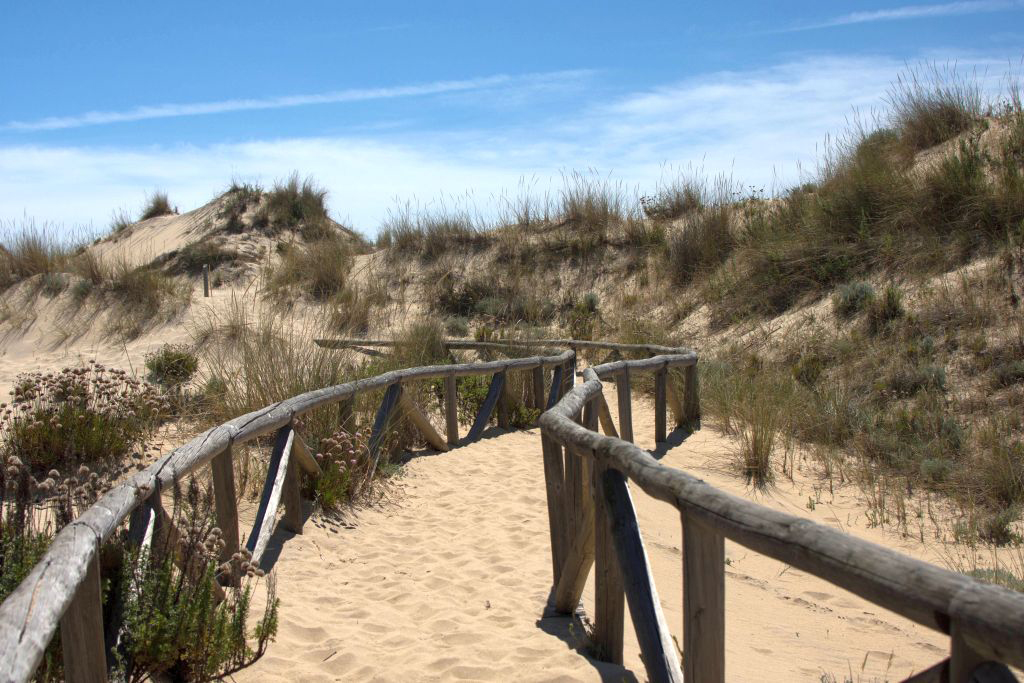 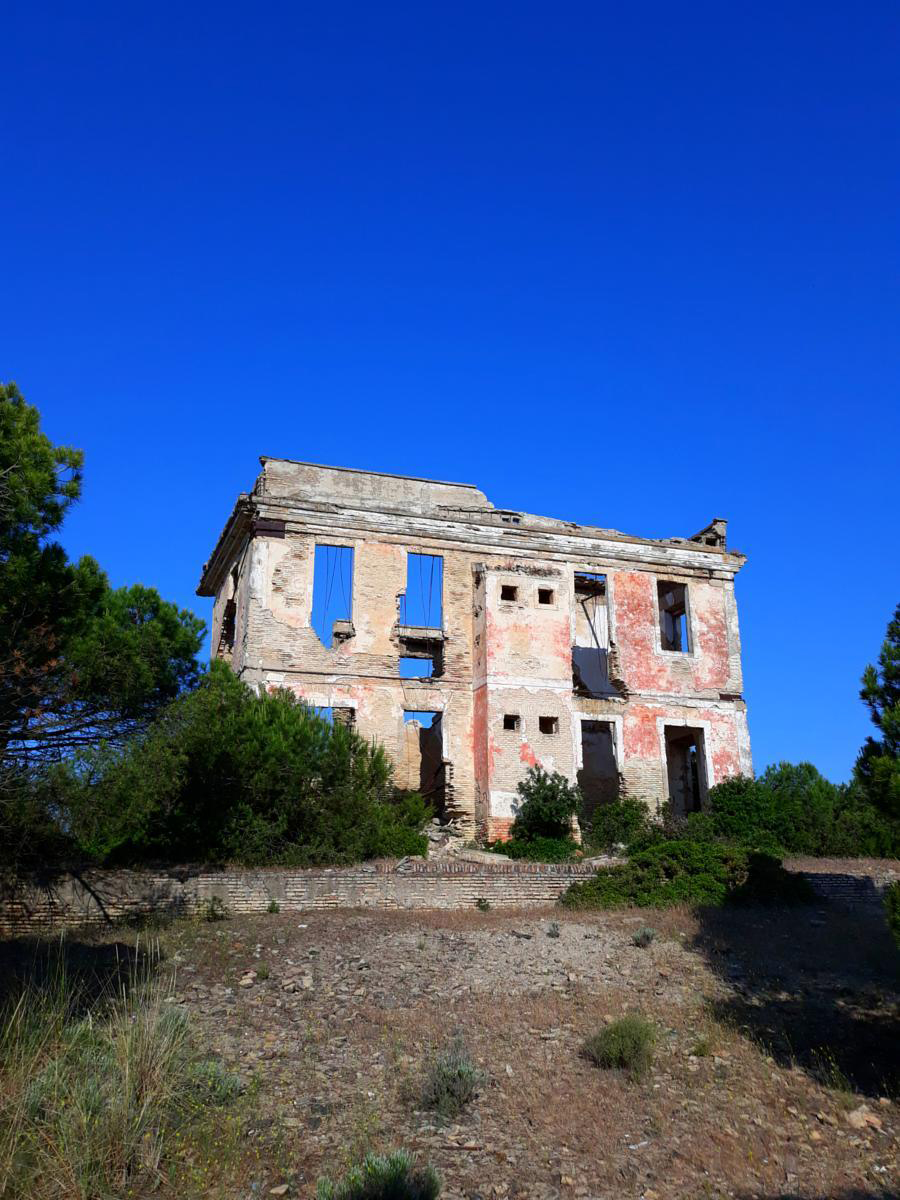 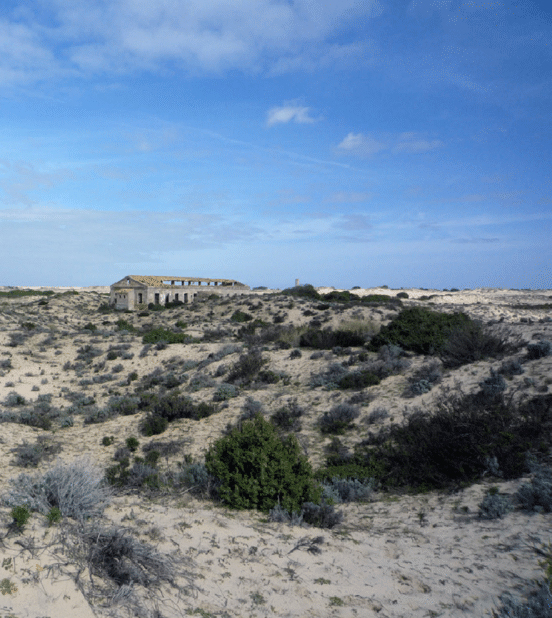 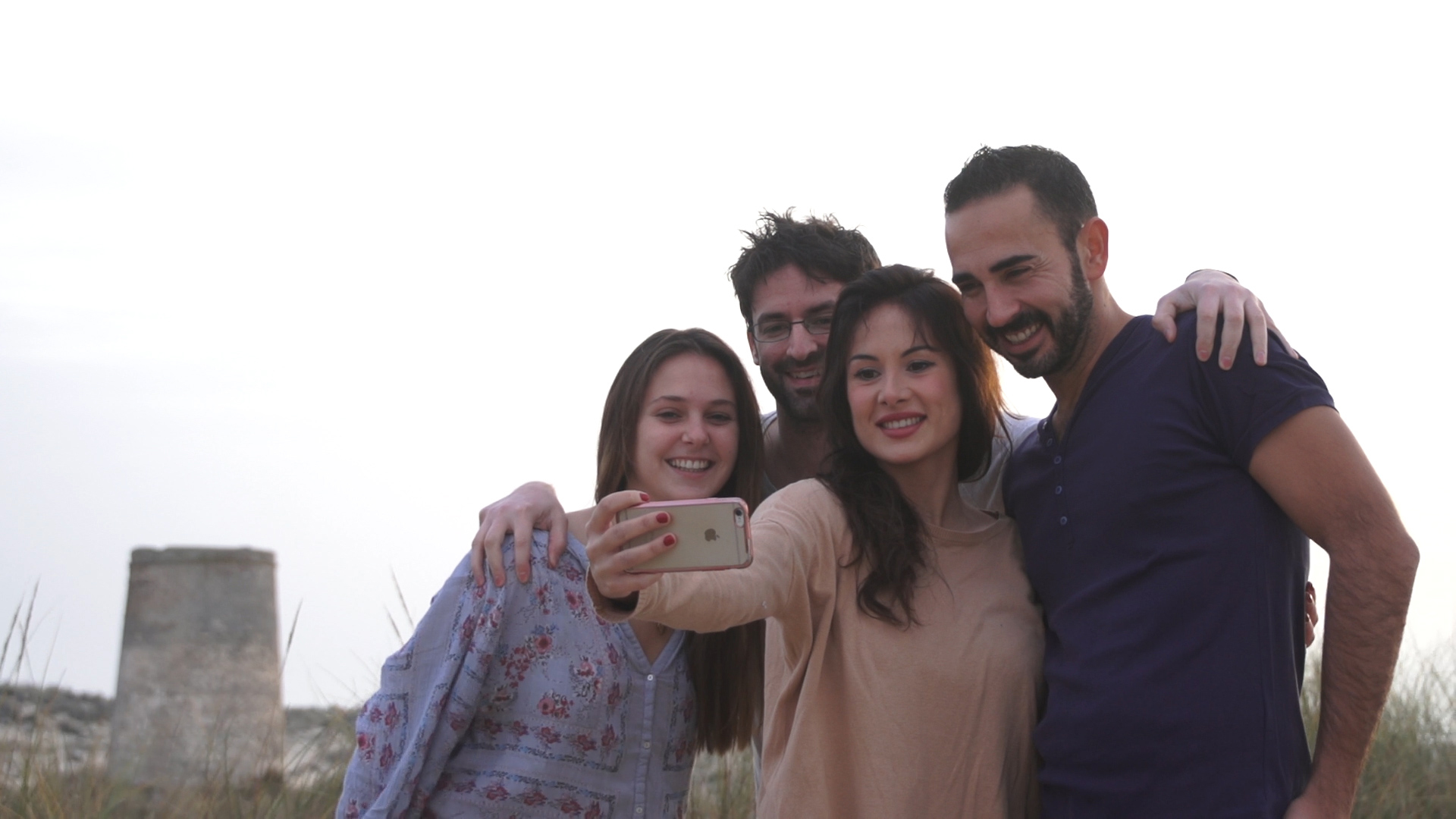 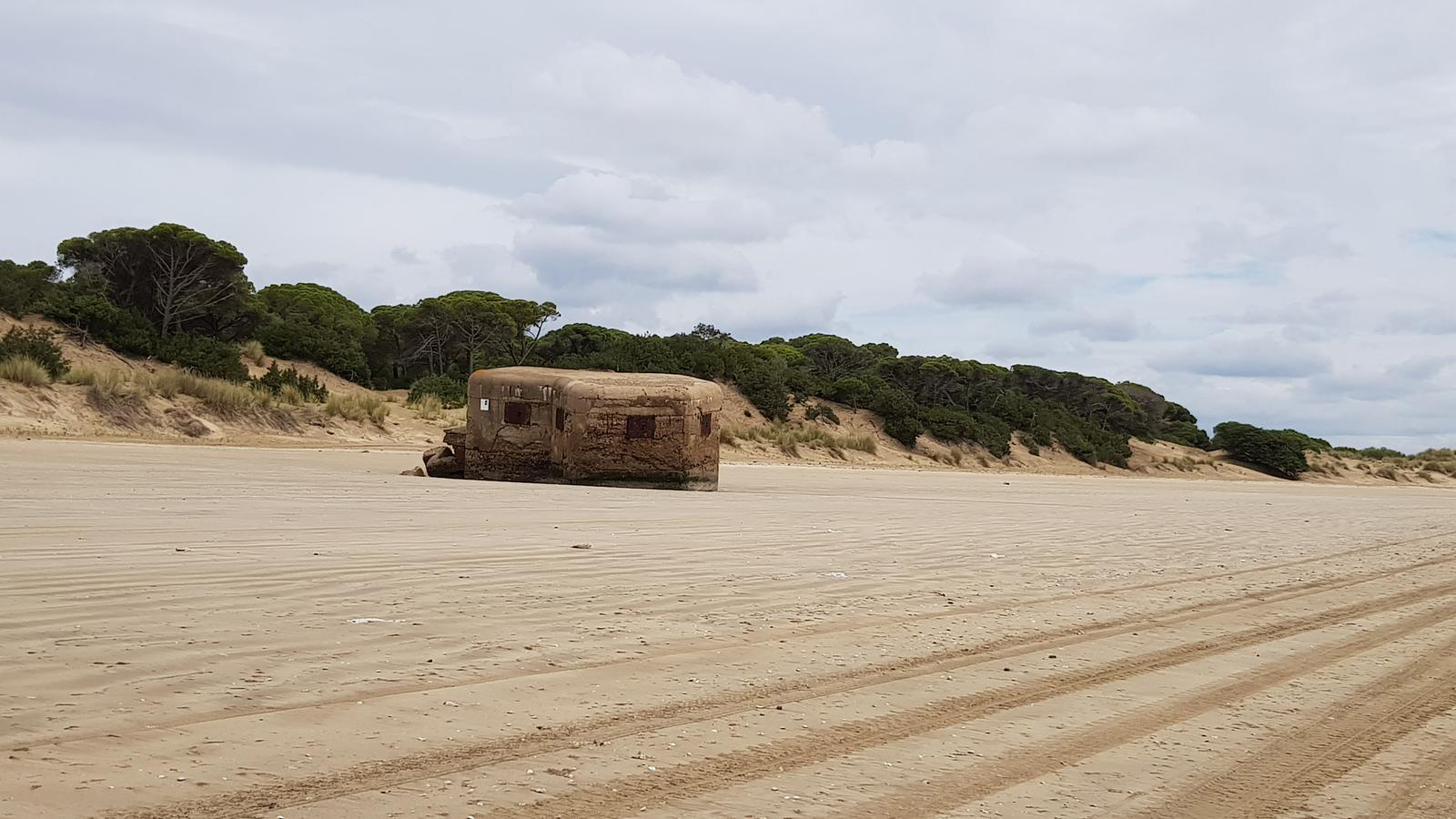 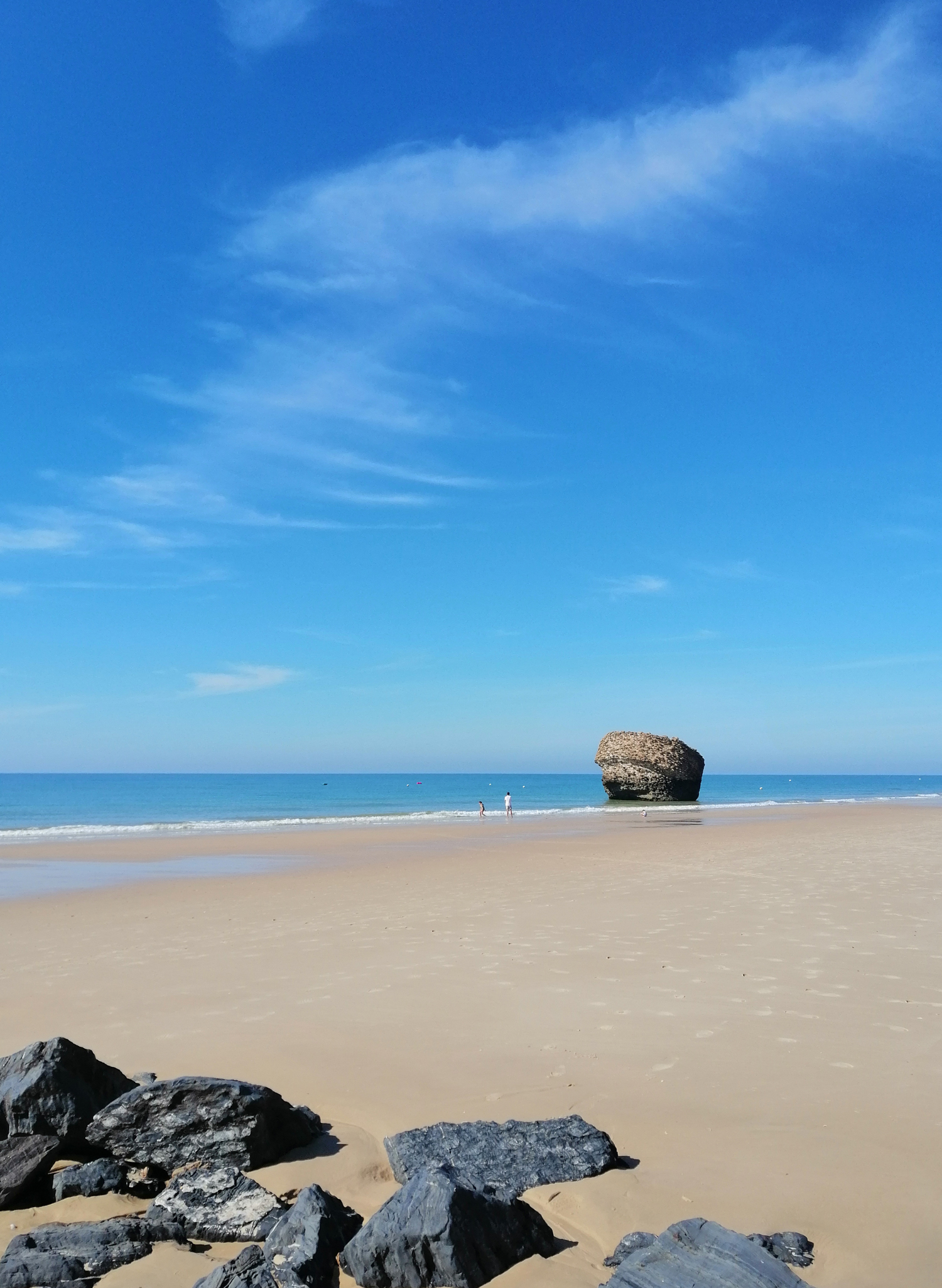 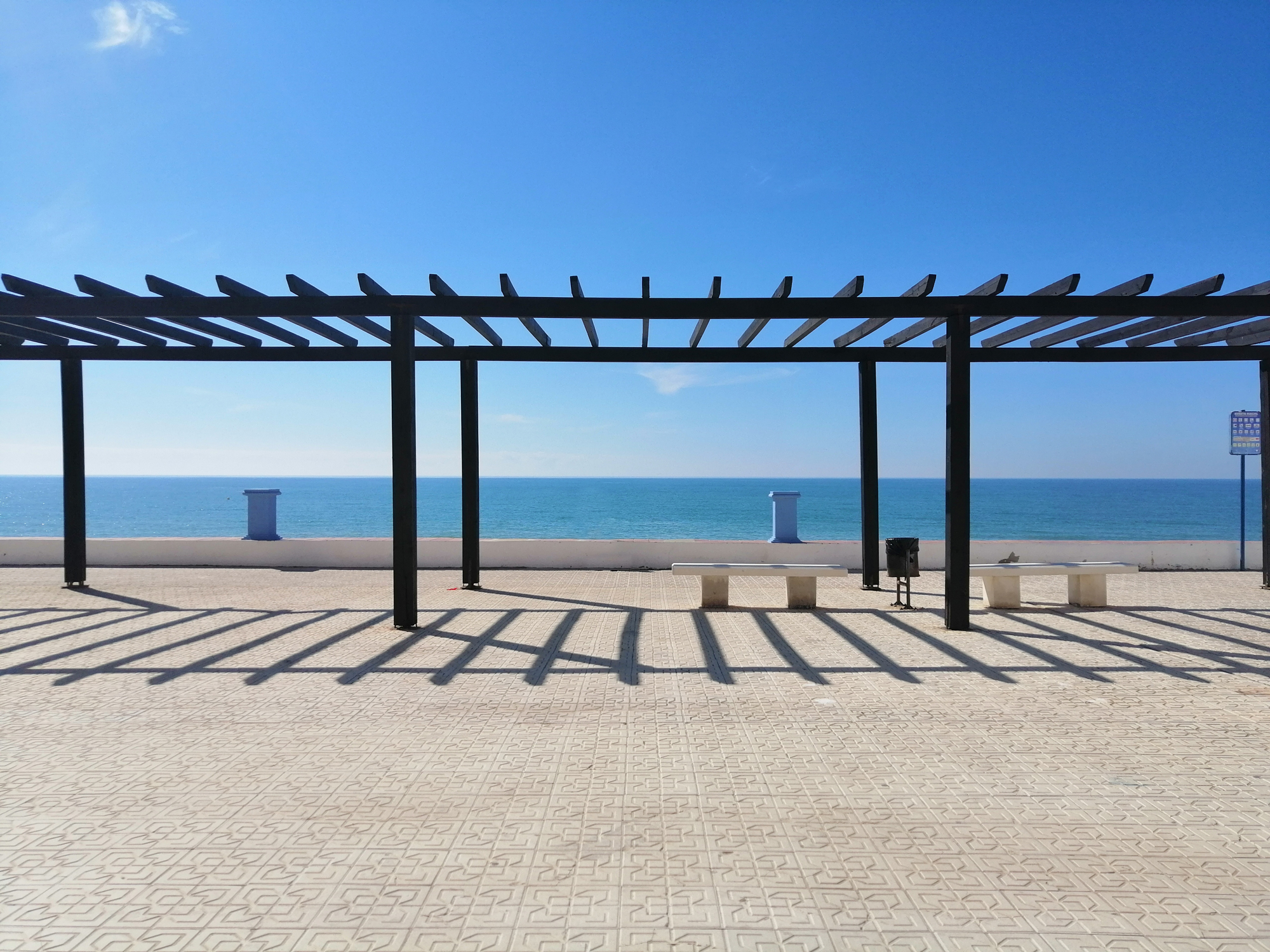 It runs along the front of the urbanization that borders the Doñana National Park. It offers more than three kilometers of green areas, pedestrian paths, bike lanes, fountains, urban furniture and children’s playgrounds ; It is one of the places most frequented by vacationers from Matalascañas.

Along the Northern Road we can see different and artistic roundabouts, a walk through the history and traditions of Huelva:

This roundabout alludes to the Discovery of America, and to the people of Huelva who accompanied Columbus on this first adventure designed in La Rábida, today it is a historical and tourist reference that alludes to this important discovery.

This roundabout refers to the dolmen culture, to the old funerary settlements that currently exist in this province. Of notable importance are, for example, the Soto Dolmens, in the town of Trigueros.

This roundabout alludes to the medium used by the fishermen of the Matalascañas coast and its economic importance in the area.

Opening towards the Laguna del Sopetón sector, this roundabout called “El Atlántico” represents, with its dolphins the sea, the vital importance of caring for the environment on the planet; Conserving the oceans is everyone’s job.

This roundabout alludes to the pilgrimages of Huelva, to the cheerful and outgoing character of its people and their hospitality.

This roundabout refers to the fortresses located in the province of Huelva: beacon towers on the coast, castles, such as Niebla, Aroche, among others.

Referring to the wine culture in the region, we come to the last roundabout in the direction of the Doñana National Park. The County of Huelva has an extensive wine tradition, so much so that it also has its own denomination of origin. Many of its wineries are part of the architectural heritage of its municipality: some restored, and others dedicated to other uses, as is the case with the Almonte Wine Museum.

Referring to the wine culture in the region, we come to the last roundabout in the direction of the Doñana National Park. The County of Huelva has an extensive wine tradition, so much so that it also has its own denomination of origin. Many of its wineries are part of the architectural heritage of its municipality: some restored, and others dedicated to other uses, as is the case with the Almonte Wine Museum.

This roundabout is a bronze sculptural ensemble that represents a salt worker in full swing surrounded by three seagulls. It is located in front of the Caño Guerrero Shopping Center.

This monument is located in the roundabout next to the Hotel el Cortijo, and the dolphin roundabout, in Matalascañas. Here we can contemplate the figure of the painter Goya, made in bronze, seven whims, and the coat of arms of Almonte. Its purpose is to publicize the temporary visit of the painter from Zaragoza, in Doñana between 1796 and 1797, where he lived in the Palace of Doñana, property of the Duke of Medina Sidonia.

This sculpture can be seen in the green area near the Hotel Edificio El Rocío, commissioned by the Huelva Provincial Council, for the acts of the international sculpture symposium, organized by the Almonte City Council in 2004; it has dimensions of 4x10x2 m, and is made of ferro-cement.

The Dune Park is made up of a space of 130 hectares, located next to the Matalascañas nucleus, in the direction of Mazagón, based on a system of fixed dunes that form a cliff about 10 meters high. These stabilized sand dunes are accompanied by native vegetation, especially Pinus pinea (stone pine) and Mediterranean scrub, which with their aromatic species give the area a special smell. This system is made up of dunes, beaches and cliffs, and has exceptional ecological value. A mass of pine forest develops, which together with remnants of the original vegetation (juniper varieties) has fixed and stabilized the sand train. Sand dunes that rise facing the sea, in which their uses have been ordered to preserve them from the impact of the great influx of tourists from its magnificent beaches.

Located in Sector N next to the Coastal Interpretation Center, this Blue Street alludes to the marine world through its mosaic sculptures.