Ancestral customs in the XXI century

The Saca de las Yeguas is one of the most emblematic traditions of the town of Almonte. Although there are numerous ancient historical references that testify to this event as an ancestral livestock event, it was not until 1504, when through the Ordinance of the Duke of Medina Sidonia that it was officially regularized. In that ordinance the figure of the "yegüerizo" appears and it is established that the cattle should move from the meadows bounded for that purpose to Almonte, coinciding with the festivity of Saint Peter, the Patron Saint of the town.

The reason for this event was twofold. On the one hand, the celebration of a horse fair for Saint Peter where the foals were sold and on the other, the threshing, in which the mares worked in the mills’ threshing floor, pulling the threshing machine, to extract the grain.

Thus, for centuries, every June 26, the yegüerizos from Almonte go in search of their herds that have been grazing throughout the year in different enclaves of the Doñana Natural Area, to drive them to Almonte. To do this, they leave for the marsh two days before and after a magical night, marked by friendship, encounters, talks, anecdotes of past tasks and how to prepare the next day, of course accompanied by good wine and song, it is expected, that with voices horse by the morning dew, that at the sight of the first rays of sun to mount up and begin the herding of their livestock that are reluctant and rebellious, not wanting to leave their shelters.

The rodeo starts very early and ends at noon

It consists of the yegüerizos, with the help of their staff or chivata, uniting the dispersed horses that come from different areas or places such as La Vera, Los Sotos, Veta La Arena, etc… Once they are gathered into manageable herds, they are led to the marsh area to make the big detour and prepare for their journey to the town. On the way to the town, they cross the village of Rocío and on their way through the Sanctuary of the Virgen del Rocío, the yegüerizos make their first stop, to be blessed by the priest and pray a “salve”. After experiencing one of the most beautiful moments along the route, the herds continue their way, leaving the Rociera village behind. In the late afternoon, before the Santa María stream, near Los Olivarejos, there is another stop to rest and organize the cattle in troops, right before the spectacular entry into the town of Almonte. This is when the peak moment is reached, where the herds are led by the yegüerizos through the streets of Almonte. Nature and civilization merge giving us one of the most unique and impressive panoramas we can see.

The tour ends upon arrival at the “Huerta La Cañada” Livestock Enclosure. A Livestock Fair will begin there during which several traditional tasks are performed, such as the tusa, which consists of cutting the mane and tail or the shoeing of the foals, in order to prepare the cattle for sale. 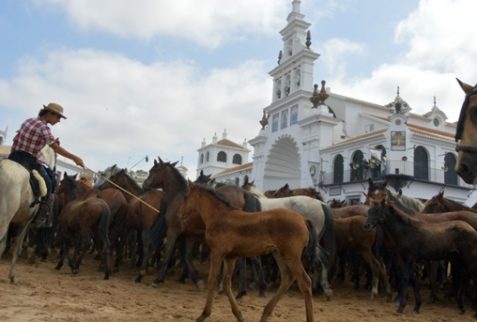 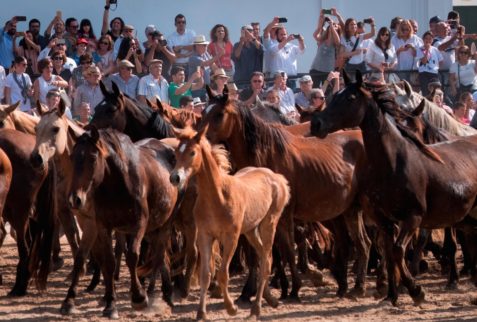 A few days later, the mares will be taken back to their natural farms of origin in the Doñana Natural Area, where they will remain until June of the following year. With these tasks, one of the traditional uses and customs of the area is maintained in a singular and unique way that amazes the visitor with its resounding and natural beauty.

As for the origin of this breed, the Marismeño horse is feminized and generalized, becoming known as Yegua Marismeña. It is a unique specimen due to its morphology, hence it is a species and breed native to the area. The marsh mares represent today in Almonte, in addition to the continuity of a historical legacy, a mark of identity, with what it entails of social and cultural value and at present this breed has more than a thousand examples.

Both the passage of the mares through El Rocío and the entrance, crossing and stay of the cattle in the town of Almonte, attract the attention of hundreds of people each year, becoming a unique show and experience for the senses. A privileged window to the origins of a tradition that even today, thanks to the people of Almonte, runs strong.

An important campaign has recently been carried out to promote this event through advertising posters at AVE (fast train) stations throughout Andalusia. . On the other hand, for eight years now, a Saca de las Yeguas Photography Contest has been held and three winning photos are chosen. All the participating photographs are exhibited in a room and the photograph awarded the first prize will be the one that appears on the poster for next year’s Saca de las Yeguas, in addition to receiving a cash prize. Every year there are more participants and people interested in visiting the exhibition.

Finally, it should be noted with respect to this event that, in the (Officially Notice of the State) BOE of February 15, 2012, the Marismeña equine breed is included in the Official Catalog of Breeds of Spain as an endangered equine horse species; that thanks to this tradition, one of the ancestral uses of the Doñana Natural Area is preserved, considered one of the most important nature reserves in Europe, this activity being unique in all of Andalusia, thus providing a clear differentiating tourism element offered by the community. 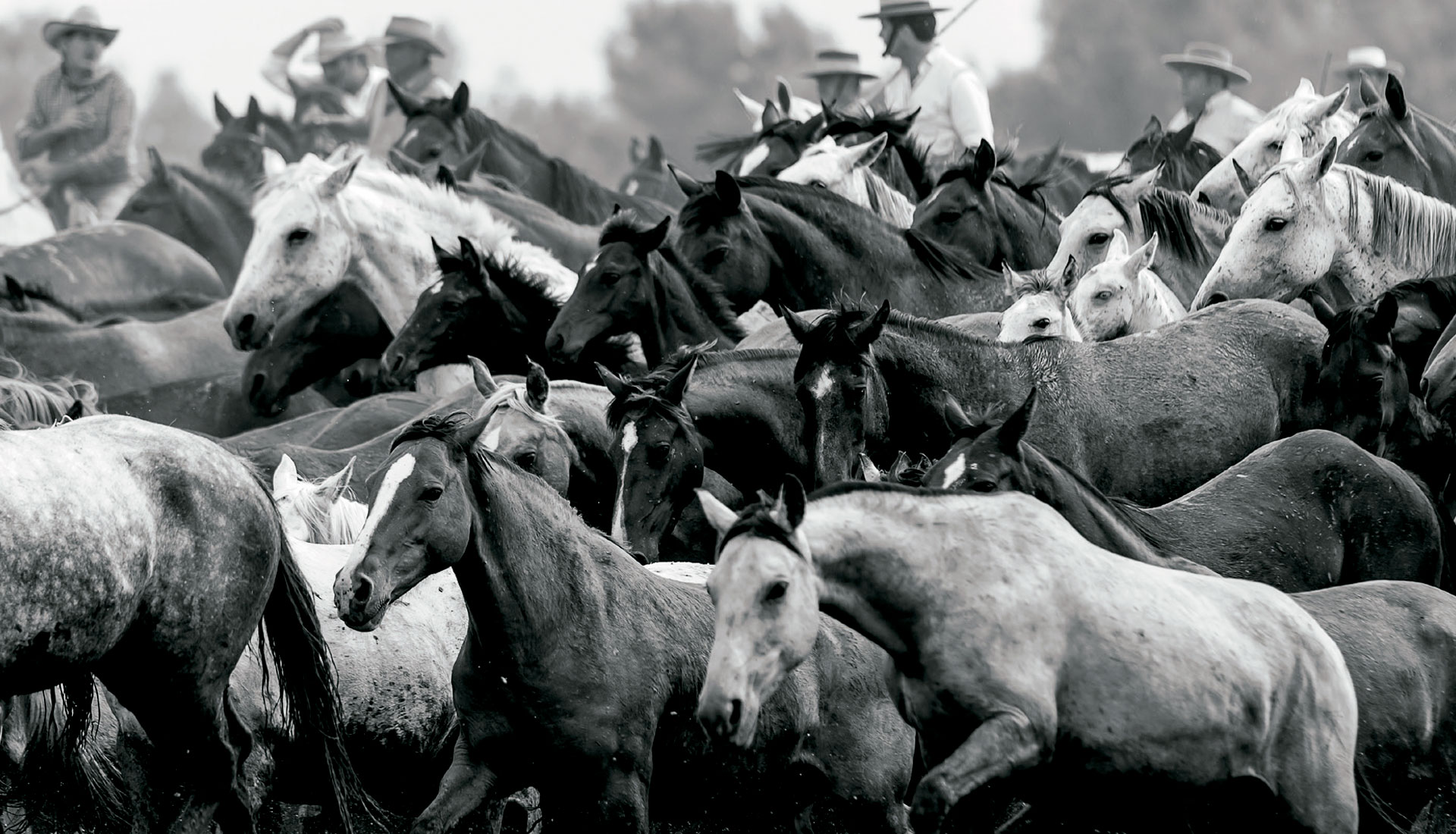 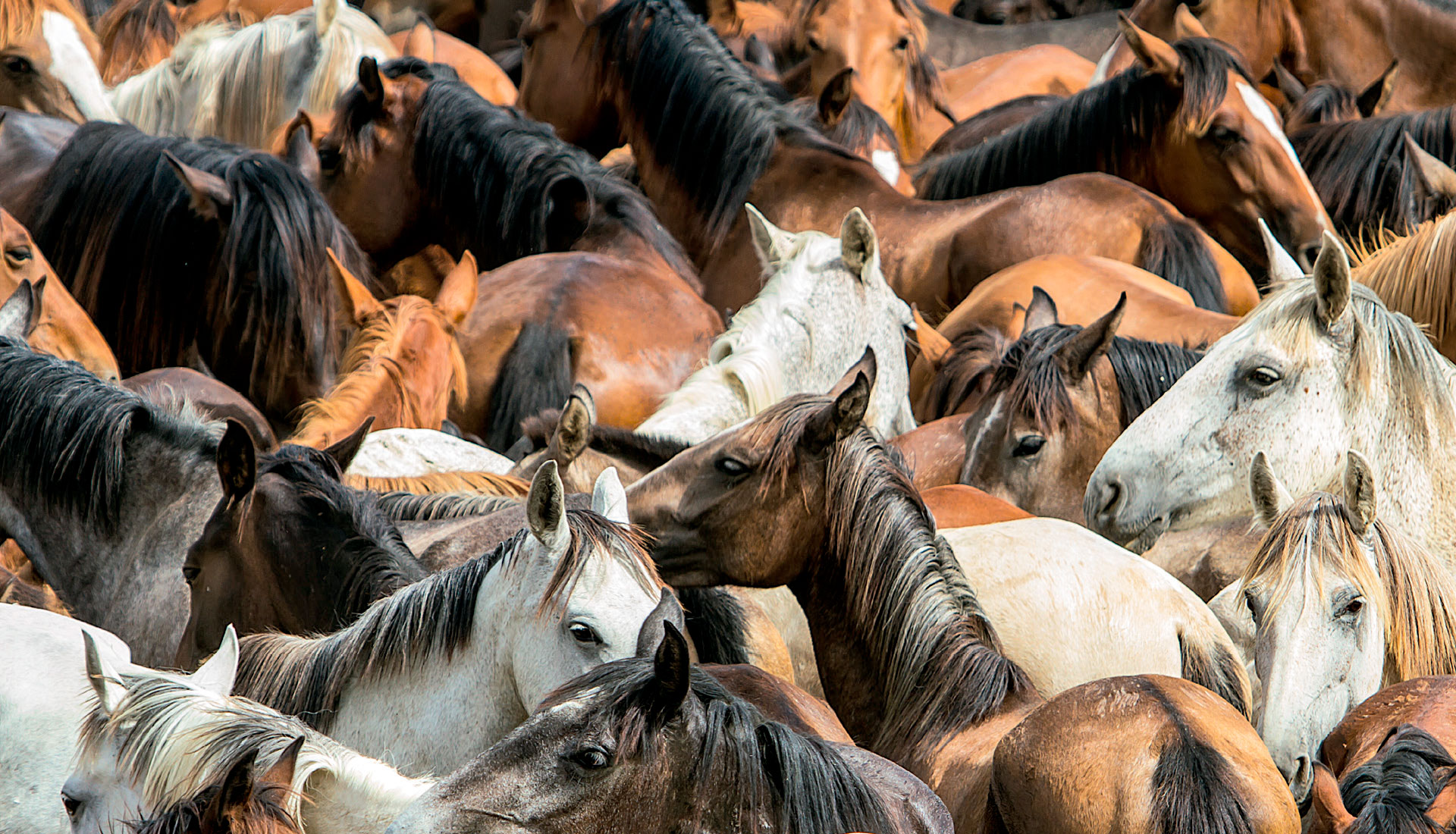 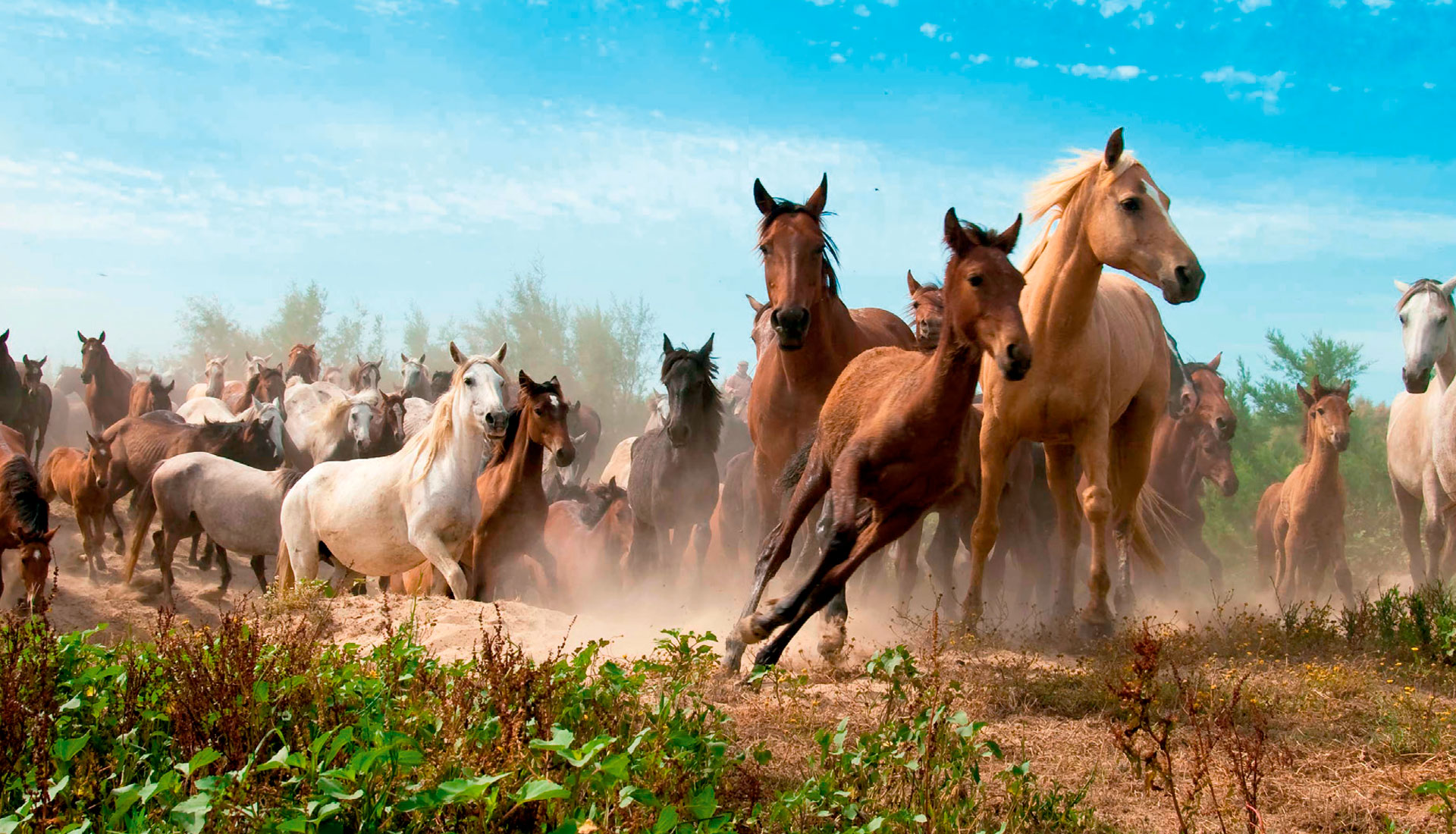 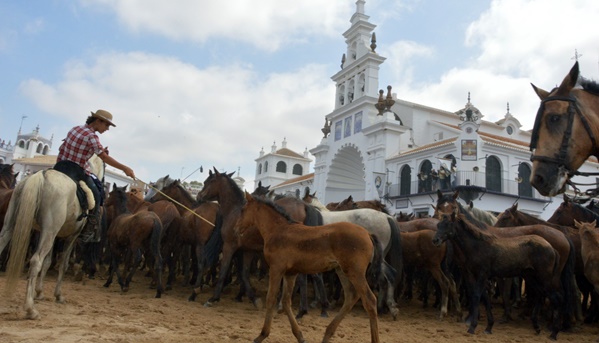 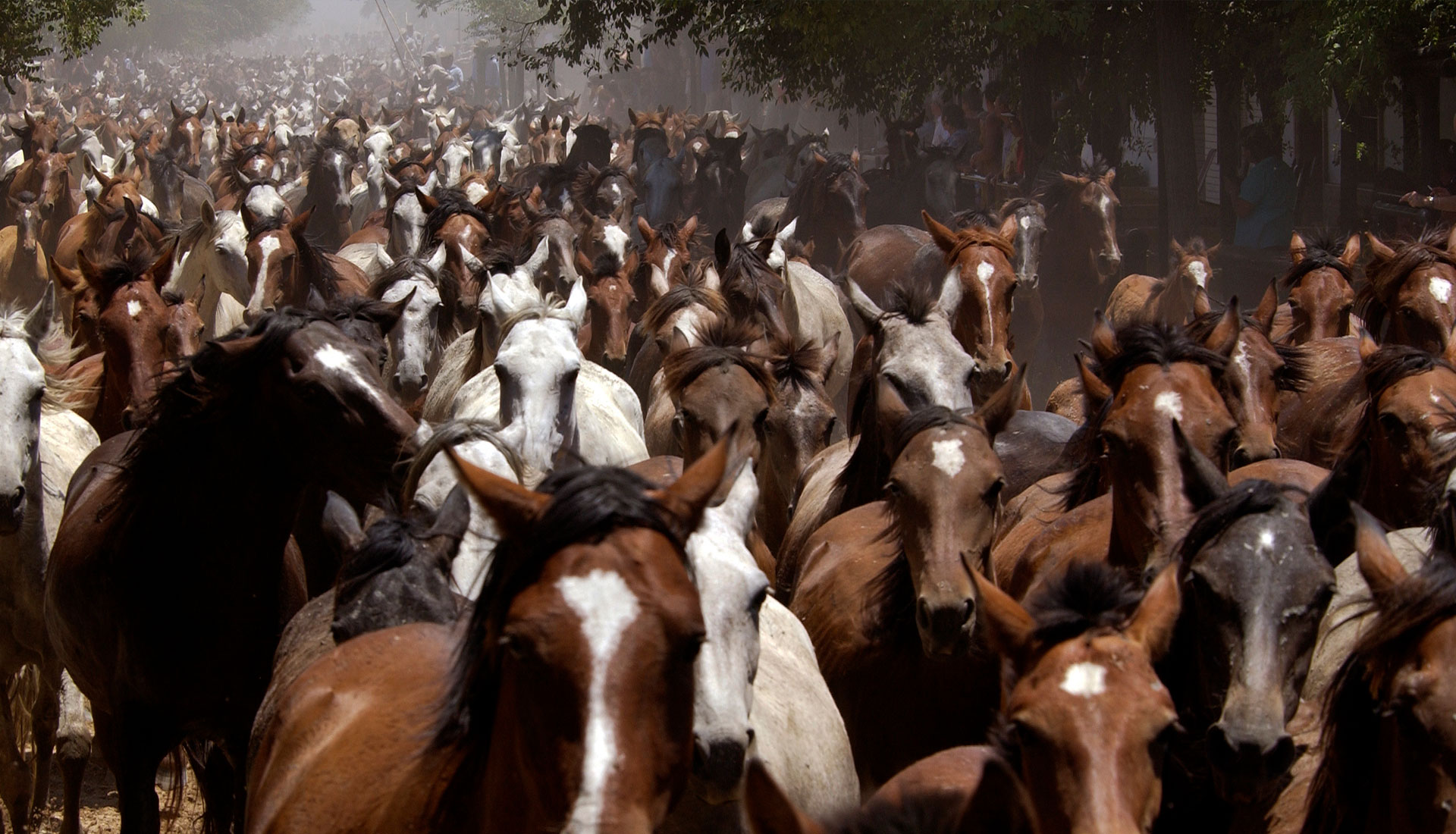 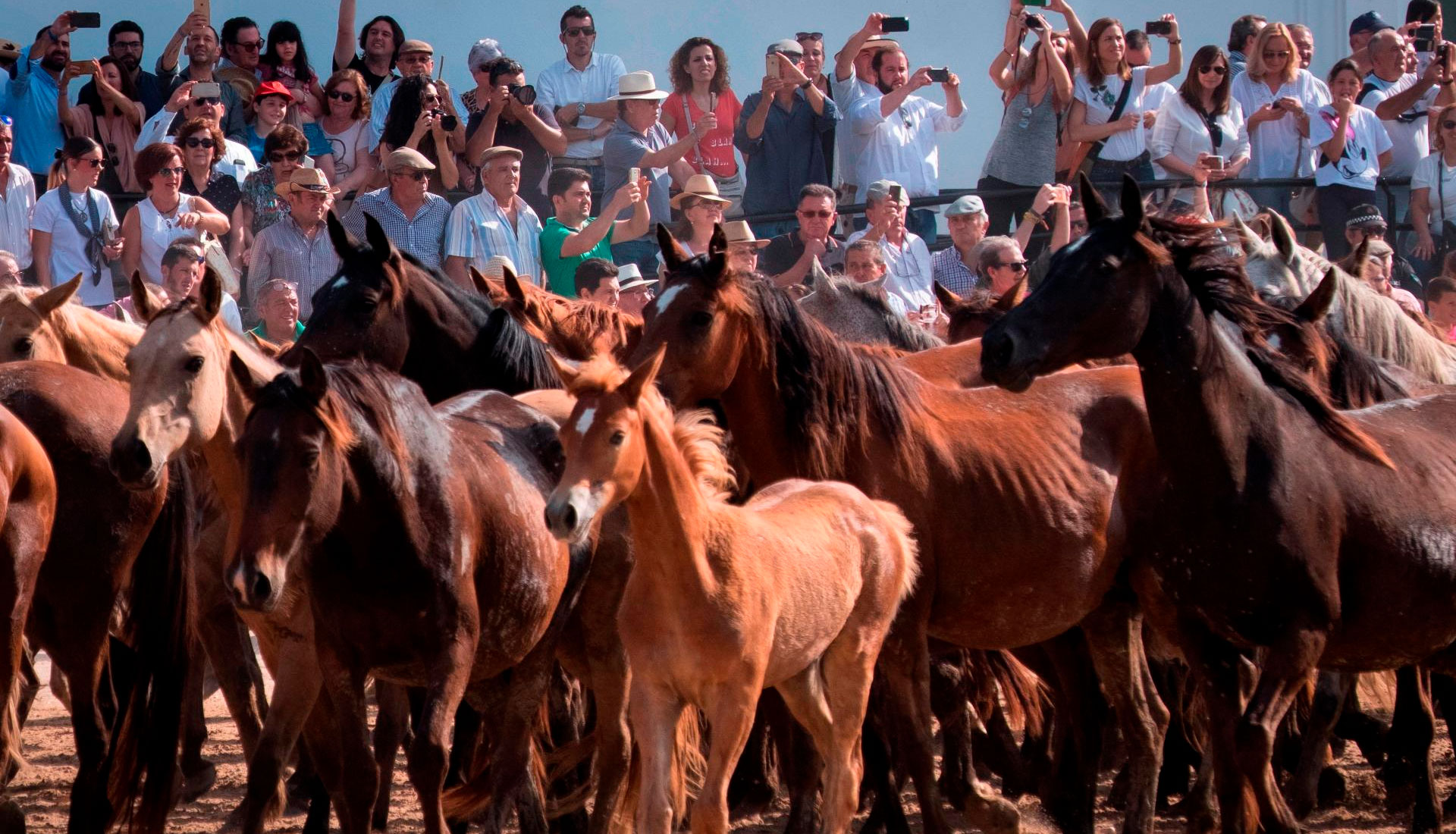